You may have seen an image for a Celtic cross before without realizing the name of the object. It’s similar to a traditional cross, but with a ring around the intersection where the smaller and longer beams meet. It may have been introduced first by St. Patrick himself when he did missionary work in Ireland.

Ornate or simple, this type of cross has a vast history, especially throughout the Middle Ages.

However, because it is so unique, many Christians wonder: what is the  origin of the Celtic Cross? And what is the meaning and symbol behind the extra circle (amongst other symbols)? Is it biblical or pagan?

What is a Celtic Cross?

As mentioned above, a Celtic cross is like a cross but with a circle in the middle. Most likely of Irish origin, there are actually two types of Celtic crosses that we have to distinguish:

The first type is the Celtic Memorial cross. These serve as headstones, especially fashionable in the 1850s during a revival of Gaelic traditions.

The second type are Celtic High Crosses, that have a slightly longer “stem” (a longer vertical beam on the cross). Instead of adorning graves, they adorn churches or important holy places. These will typically have a pyramid base at the bottom.

No matter which Celtic cross you think of, they typically have the same symbolism. The circle in the center typically represents the sun, an important item of worship in Druid religion.

To preach the Gospel to the Druids, St. Patrick united the element of the sun with the cross of Christianity, showing how the true “Son/Sun” far outshines any god, deity, or spirit of another religion. Yet this article suggests that St. Patrick blending two religions together is just a new-age fabrication.

Others have said the circle represented a moon goddess typically associated with pagan religion. Many have translated the meaning of the circle to symbolize eternity (since a circle has no beginning and end), showing the eternal nature of God.

The Celtic cross also has very strong roots in Irish nationalism. The circle in the center of the cross has also been known to represent a Celtic shield. Or, the cross would have resembled a tree, to make the Gospel more palatable to pagan religions who frequently used trees as symbols or items of worship.

Where Did the Celtic Cross Originate?

Although it’s popularly believed St. Patrick introduced the Celtic cross, others have conjectured differing origins for this popular Irish symbol.

Some have said St. Declan, a fifth-century Christian who evangelized in Wales, first introduced the Celtic cross.

No matter which Saint first introduced it, the Celtic cross had a popular history throughout the middle ages, featuring several ornately crafted crosses, and had a revival in the 1800s. Many gravestones featured the cross during that time. 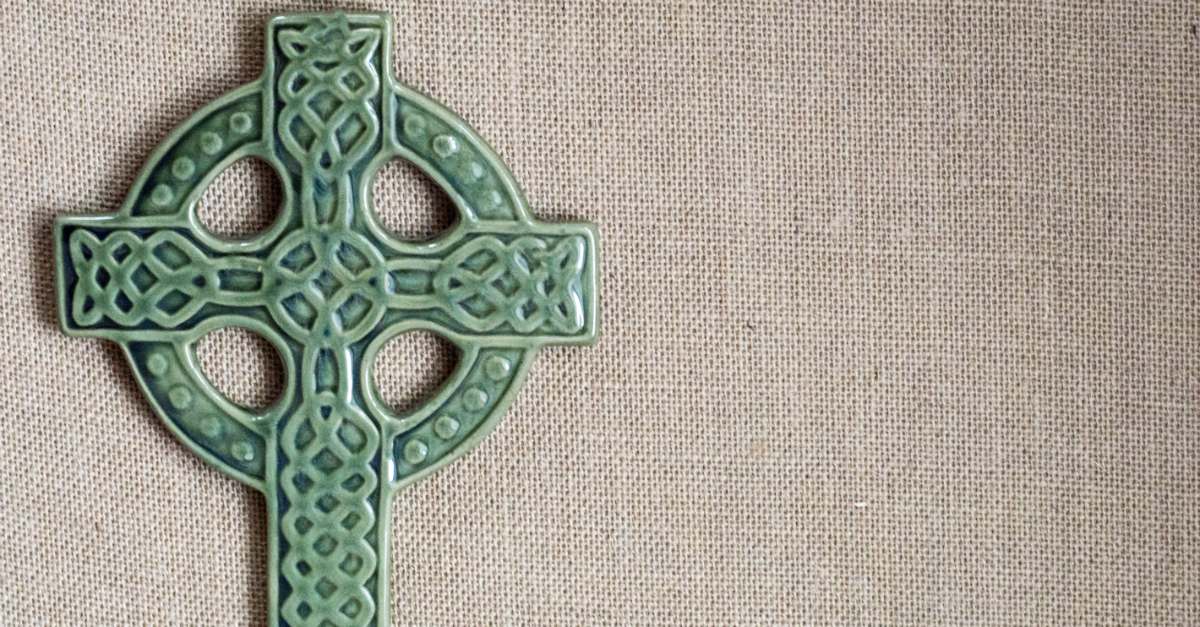 Is the Celtic Cross Biblical?

It depends which tradition is true, and the true meaning behind the circle in the center.

Crosses, without a doubt, are biblical (Philippians 2:8). And because we cannot reach a consensus about the true origin and meaning of the Celtic cross, we don’t know if it has true biblical roots or not.

However, Christians can learn biblical truths from the Celtic cross.

Assuming the center does mean eternity, we can learn about the eternal nature of God.

God has no beginning and no end (Psalm 102:12). We can know that though the earth may pass away and seasons change, God does not change. He’s the same yesterday, today, and tomorrow.

We can also think about eternity in the sense that we will live with God forever once we leave this earthly life. We’ll reunite with fellow Christians who have gone before us, and will spend a glorious eternity with God.

Even if the circle in the center had a pagan origin, we should keep in mind:

God can use anything for His glory.

Paul, throughout the New Testament, quoted from pagan philosophers and poets. He even used a pagan idol to point to Jesus (Acts 17:23). God can use anything for his kingdom. We can find points of intersection with those of other religions and start a dialogue about why we believe what we believe.

Some Christian symbolism and traditions have pagan connections.

We also have to keep in mind this wouldn’t be the first time Christianity has blended elements of other religions to make the message of the Gospel more palatable. Traditions in Halloween and Christmas have pagan roots which Christians translated to have Gospel truths and meaning.

Just like the circle in the center may have represented the sun, but they pointed to the true Sun (Son).

Of course with any element of other religions, Christians do have to exercise caution when finding points of intersection, especially with having more enigmatic origins.

No matter whether the circle has pagan or Christian roots, crosses are without a doubt Christian symbols, and the Celtic cross shows how Christianity and forms of worship can spread in a beautiful way across other cultures.

Is The Celtic Cross Worn By Christians?

Although Celtic crosses typically adorn graves and churches, similar to the traditional cross steeples and graves, we do see wearable Celtic crosses.

One of the most popular symbols associated with the Celtic cross is the Celtic knot, composed of seven strands, with each strand representing something important in Celtic culture.

Throughout history, these knots have been etched on Celtic crosses and woven into a popular Celtic jewelry piece known as the Trinitarian knot, symbolizing the Trinity.

These knots had origins as far back as the Roman Empire and played a huge role in artistic decoration in the Byzantine era.

The Compass Rose was another symbol associated with the Celtic cross, used by sailors and later translated into popular jewelry pieces.

Why Does the Celtic Cross Matter?

Why does it matter that we learn about the symbolism of the Celtic cross? First, it helps us to understand the heritage of our brothers and sisters of the faith who live and come from Ireland. We can see how this cross has played a major role throughout their history.

Second, we can see ways we can open a dialogue with those outside of the Christian community. St. Patrick (or whoever introduced the Celtic cross) understood the important symbols of the Druid religions and used those to point toward the Gospel.

We can learn from those outside of the Christian faith and use points of intersection to direct them toward the Gospel message.

Lastly, we can remember Christ and God’s eternal nature every time we see the Celtic cross. Whenever we see this symbol on a necklace or serving as a headstone, we can be reminded of God’s death and resurrection, so we can spend eternity with him.

Hope Bolinger is a literary agent at C.Y.L.E. and a graduate of Taylor University's professional writing program. More than 500 of her works have been featured in various publications ranging from Writer's Digest to Keys for Kids. She has worked for various publishing companies, magazines, newspapers, and literary agencies and has edited the work of authors such as Jerry B. Jenkins and Michelle Medlock Adams. Her column "Hope's Hacks," tips and tricks to avoid writer's block, reaches 6,000+ readers weekly and is featured monthly on Cyle Young's blog. Her modern-day Daniel, Blaze, (Illuminate YA) released in June, and they contracted the sequel Den for July 2020. Find out more about her here.

This content first appeared on Crosswalk.com and is used here with permission. To view the original visit: https://www.crosswalk.com/church/worship/celtic-cross-meaning-origin-symbolism.html

Beware the Sin of Idolatry - Your Daily Bible Verse - February 22