I have been thinking about what that day must have been like for those who dropped everything to follow Jesus. How crushing those events had to be. I imagine the fear they felt that they would also be killed. And for what? On Saturday they feared they had given their careers and their very souls for a false hope.

I think in particular of Peter. I identify so much with him. Like him I throw down bold statements of loyalty to the Lord and then let Him down. Like him I draw attention to my own accomplishments instead of recognizing where my accomplishments come from. Like Peter I am a generally sincere but desperately needy follower of Jesus.

You know the story about Peter before the arrest and mock trial of Jesus. Jesus tells Peter that he will deny him three times before the rooster crows at dawn. For many years I breezed by the setup to that prediction.

“Simon (Peter), Satan has asked to sift each of you like wheat. But I have pleaded in prayer for you, Simon, that your faith should not fail. So when you have repented and turned to me again, strengthen your brothers.” (Luke 22, NLT)

Jesus had already prayerfully pleaded for Peter to be used in a powerful and redemptive way before the failure, shame and repentance that Jesus knew was about to happen. Our sin does not take Jesus by surprise. Why does His grace and forgiveness surprise us?

Like me, Peter did not hear the tender words of encouragement from the Lord. Nope. He blustered.

“Lord, I am ready to go to prison with you, and even to die with you.”

After the arrest of Jesus a suddenly less bold Peter followed the crowd. He denied to a servant girl that he knew Jesus. He denied his alliance to another bystander. The crushing sorrow and shame of what happened next is hard to fathom.

About an hour later someone else insisted, “This must be one of them, because he is a Galilean, too.”

But Peter said, “Man, I don’t know what you are talking about.” And immediately, while he was still speaking, the rooster crowed.

At that moment the Lord turned and looked at Peter. Suddenly, the Lord’s words flashed through Peter’s mind: “Before the rooster crows tomorrow morning, you will deny three times that you even know me.” And Peter left the courtyard, weeping bitterly. 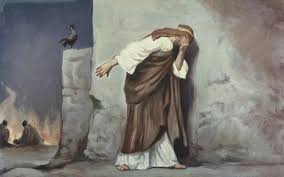 I imagined what the expression might have been on the face of Jesus when He turned and looked. I suspect it was a look of sadness, compassion and longing to comfort His friend. But what Peter probably saw was only disappointment and failure. Peter’s tears likely flowed until they could no longer flow. I suspect it was hard to even breathe. His heart literally ached within his chest. His mind could not imagine any future hope. I wonder if he thought about running away or even ending it all. I wonder if he could think at all.

That Saturday was one of the worst days in history and Peter may have felt the pain of that awful day more intensely than anyone. He did not know what would happen the next day. Peter did not yet understand what Jesus had been telling him.

When Luke recounts that Jesus appeared to the Disciples the only one mentioned by name is Peter. What gives me hope this Easter season is the tender story of Jesus affirming and reinstating Peter to be a leader who would “feed His sheep”. That is the grace that changes a heart.

I can betray Jesus. Ignore Him. Live selfishly. At some point I once again recognize my desperate need for Jesus to rescue me. For the one millionth time I turn to Him. And what happens? He lifts my shame bowed head and looks deeply into my eyes. He tells me how much He loves me. That is grace. That is real. That is love. Maybe I won’t have a day quite as bad as Peter on that horrible dark Saturday but his story of redemption encourages me this Easter season.

Saturday was terrible. But Sunday was coming with the wonderful news that He is risen! He is risen for me! Jesus is pleading for me that my faith will not fail. What a joyous hope for all of us this Easter.

This content first appeared on Crosswalk.com and is used here with permission. To view the original visit: https://www.crosswalk.com/blogs/david-burchett/the-worst-day-of-peters-life.html